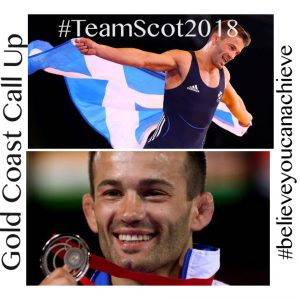 A north-east wrestler is set to board the Team Scotland plane for the Gold Coast this spring, having been selected for the Commonwealth Games 2018. Oldmeldrum-based Viorel (Vio) Etko is the current Commonwealth Games bronze medal holder and has his sights set on further success following the recent announcement.

Vio is one of a four-strong Scottish wrestling team, including Alex Gladhov, Ross Connelly and Joe Hendry, who will be pushing for the podium in Australia in April. A seven-time British wrestling champion, he will compete for Team Scotland along with Ross Connelly in the men’s 57kg weight category and is excited about the opportunities that lie ahead:

“It is a huge honour to represent Scotland at a third successive Commonwealth Games,” said Vio. “Wrestling is a fantastic sport and it’s very encouraging to see it gain in popularity and profile here in Scotland. Its inclusion once more as a sport within the Commonwealth Games programme can only serve to increase this awareness further.

“I know that myself and my fellow Team Scotland wrestlers will do our very best to cement our country’s reputation at the top of the sport – and I hope that we will inspire others to give it a try too.”

Wrestling was one of the original six sports in the inaugural Commonwealth Games, however it remains an optional sport on the programme. Vio, along with his 2018 team-mate Alex Gladhov, claimed Scotland’s first Commonwealth Games wrestling medals for 20 years at Glasgow 2014. 22 nations were represented at that time, compared with only three at the inaugural 1930 Games.

The Commonwealth Games countdown is now well and truly on for Vio and Team Scotland, with Australian-based training camps scheduled to begin in March. Activity then moves to the official Gold Coast Games Village from April onwards. The wrestling events are due to be contested from 12-14 April 2018. Further information on the full Commonwealth Games Gold Coast 2018 programme is available at https://www.gc2018.com/

Vio Etko has dedicated much of his working life to inspiring a love of sports in others. Along with his wife Laura, a former international gymnast, he owns and manages ETKO Sports Academy in Oldmeldrum. The facility, which offers a variety of coached sessions, fitness classes and activities, welcomes over 1000 children through its doors each week.