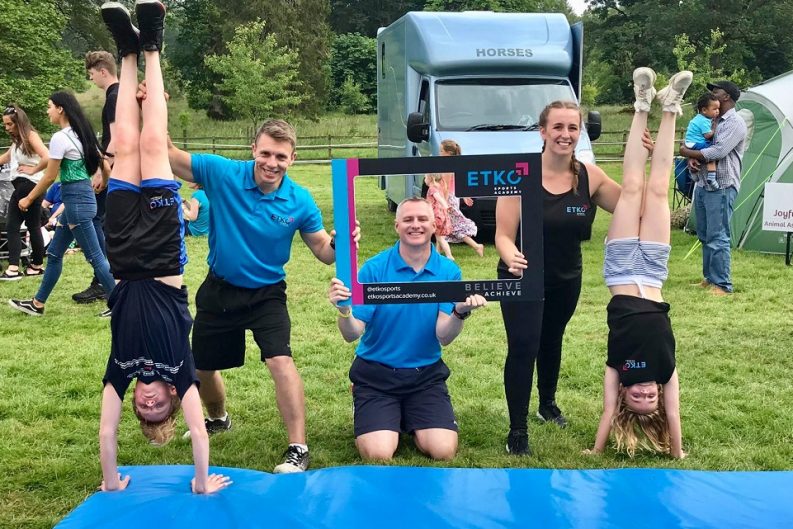 ETKO Sports Academy showed its support for a local charity by running a children’s activity area at the Day at the Races event at Castle Fraser in aid of North East Sensory Services on Saturday, 29 June.

The event, which was organised by George Walker Event Management Ltd and hosted in association with CHC, had a packed race programme with fixtures including ponies, camels and a Celebrity Hobby Horse Grand National. Its purpose was to raise money for local independent charity North East Sensory Services, which provides blind and deaf people with information, equipment and much-needed support. Over 3,000 people passed through the gates to enjoy the entertainment in the Aberdeenshire sunshine.

Throughout the afternoon, ETKO instructors were on-hand to supervise a children’s obstacle course and matted gymnastics area. The equipment, which was also supplied by ETKO Sports Academy, proved to be highly popular with the younger guests at the event – many of whom chose to take multiple turns round the course.

Laura Etko, founder and director, ETKO Sports Academy said: “When we received the initial approach to support Day at the Races, we were determined to do what we could to support such a fun and worthwhile local event.

“Our team are extremely experienced in working with children of all ages and abilities, so we were confident that we could set up an activity area that would be enjoyed by a range of young people. We are delighted that so many families took the time to join in the fun with us on Saturday.”

ETKO Sports Academy was founded in 2008 by former international gymnast Laura Etko and her husband Viorel (Vio), a current Veteran World Champion in wrestling and a 2014 Commonwealth Games bronze medallist. The company, which employs 30 people, is committed to helping people achieve their sporting potential and encouraging long-term participation in sport.