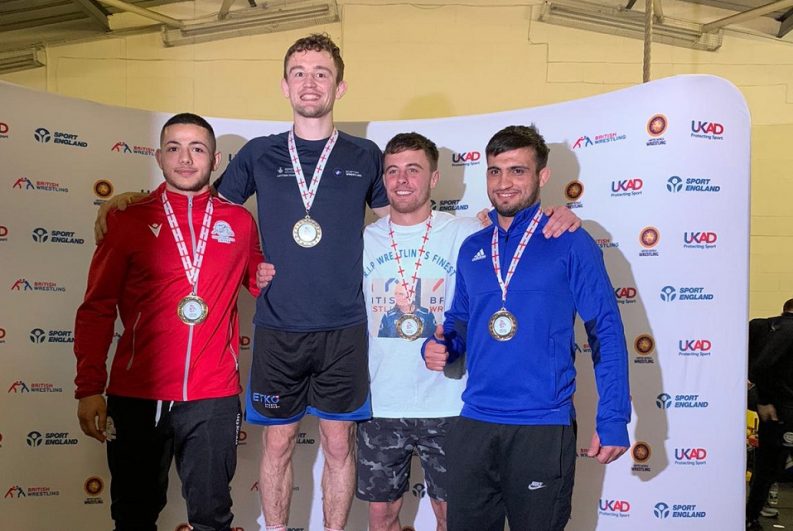 An Oldmeldrum-based wrestler has struck gold for the fifth time in a row after triumphing at the recent English Senior Open Wrestling Championships held at the British Wrestling Academy in Greater Manchester.

Nico Cojocaru (32), a wrestling and fitness instructor with ETKO Sports Academy, took the podium top spot while representing the organisation’s competitive wrestling division, ETKO Wrestling Academy, in the 74 kg category. His path to success included a semi-final win over Commonwealth Games bronze medallist Charlie Bowling and a further win for technical superiority in the final over Maltese wrestler, Andrew Azzopardi.

“It was good to be back in Manchester with my colleagues and great to catch up with others on the wrestling circuit,” said Nico. “Competing in this event is always a useful benchmark; it allows me to gauge where I am and what might come next.

“My other motivation for competing is my desire to inspire the next generation in Scotland to get involved with wrestling, which tends not to get the same exposure as many other sports.”

Nico works alongside – and trains with – former World Veteran Wrestling Champion, Viorel (Vio) Etko, who founded ETKO Sports Academy with his wife Laura in 2008. In addition to delivering the competitive wrestling programme, the pair run a series of wrestling sessions for a variety of age groups from Mighty Movers for Primary 1 children to Train Like a Wrestler classes for seniors. Over 70 boys and girls take part in the junior classes.

Commenting on Nico’s success in Manchester, Vio said: “It was wonderful to watch Nico wrestle to victory during the English Open Championships. He is extremely committed to the sport and is passionate about sharing his love of it with our members in the north-east. We are all delighted for him.”